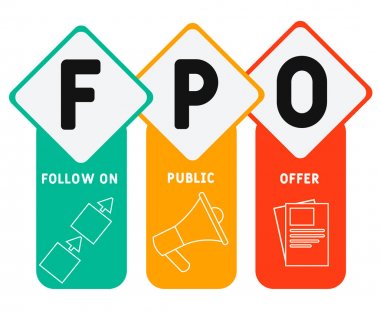 Follow-On-Public Offering (FPO) is a process by which a company, which is already listed in stock market, issues new shares to the investors in the market.

In simple terms, FPO is issuance of additional share to the investors. It is used by companies to diversify their equity base.

For example – Suppose, company XYZ have raised capital through an IPO process to get itself listed in stock market. Afterwards in future, if the same company wants to raise more capital to pay off some debts, it can issue new or existing securities again in public.

But this time the company does not have to go through the process of listing itself again in share market, it can directly issue its shares to the existing shareholder or to the public. This process of share issuance is called FPO or follow-up-on-public offer.

How FPO is different from IPO

In IPO (Initial Public Offering), an unlisted company raises funds by offering its shares to the public for the first time and get itself listed in the stock market.

Whereas, in FPO (Follow-On-Public Offering), a listed company offers fresh or existing securities to the public for the second time.

Dilutive offering is when a company issues additional shares to the public. This is generally done to pay off some debts.

In this type of offering, the value of company remains constant. And as per the quantity of shares increases, the company’s EPS (earning per share) also decreases.

In non-dilutive offering, company’s insiders such as company’s founders or members of the Board of Directors sells some of their privately held shares in the public market.

Since no new shares are issued to the public, the company’s EPS (earning per share) remains unchanged. This follow-up offering is also called as secondary market offering.

In which offering should I Invest?

IPO investment requires more research compared to FPO investment. IPO have more potential return for investors. If a company kick off a good start just like Burger King. In December 2020, Burger king announced IPO and within few hours the IPO was oversubscribed. It was at the hype, plus investment returns was also great.