What is Delisting Of Shares? – Saurabh Investments 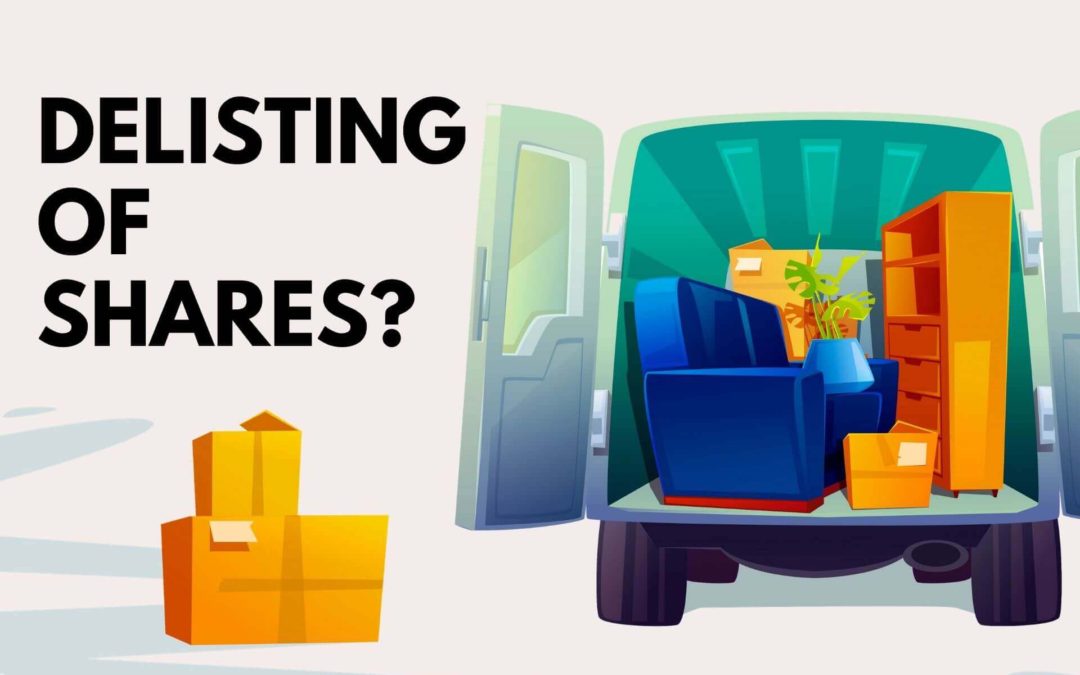 Delisting of shares is the permanent removal of company’s stocks from the Stock Exchange, thus it would be no longer traded in the stock market. This delisting of securities can be either voluntarily or involuntarily in nature, and usually results when a company ceases its operation, declares bankruptcy, mergers with another company, or does not meet listing requirements.

Sometimes a company wishes to remove its securities permanently from the stock exchange in order to expand or facilitate business restructuring following an acquisition, or when the promoters wish to raise their stake in the business.

Sometimes, company may choose to delist its shares keeping in mind the various responsibility attached to being listed entity, such as adhering to various disclosure and corporate governance requirements.

If a company wishes to permanently exit from Stock Exchange, it will require to follow SEBI guidelines as well as the approval from its existing shareholders.

Example of Voluntary Delisting – On 13th January 2021, Max India.ltd Company delisted its securities from the stock market due to the mergence with Max Healthcare Institute Limited.

Sometimes a company is forced to remove its shares from the stock exchanges for various reasons such as penal action, non-compliance of listing guidelines, late filing reports, low share price, etc.

Example of Involuntary Delisting – On 9th November 2020, Hexaware Technologies Ltd. Company were forced to delist their shares from the Stock Exchange as per SEBI (Delisting of Equity Share) Regulations Act 2009.

What happened during a Delisting of Company’s Securities?

If a company is voluntarily delisting its shares, the stakeholders are offered to tender their securities to the company at a floor price determined by the reverse block process.

In case of involuntarily delisting, the company’s director, promoters and group firms won’t be allowed to access the securities in the market for the next 10 years from the date of delisting. Also the promoters of the company are required to purchase the shares from public shareholders as per the current market value.

Do companies get benefit from delisting their securities?

In comparison with a listed company, an unlisted Company will have some of the following benefits –

Should we buy Shares while it is about to get Delisted?

In most cases, when there are rumors about delisting of shares, some investors get attracted to those stocks. Before investing in such securities, it is advisable to understand why a company is voluntary delisting its securities.

Any retail investors should not think delisting as a reason for high investment. To decide whether to buy a delisting offer or not, one need to study a variety of quantitative and qualitative factors. One should take an objective decision rather than simply rejecting an offer outright.

Investor must assess the financial health of business, past performances, achievements done till date, current value of its shares, and of course its shareholding patterns.

If the company is successful in purchasing over 90% of shares, it will get approval for delisting and the stock will available for trading. So investors who have chosen not to tender shares might end up holding non-trading shares.

Apart from this, an investor should also take note of the period during which a delisting will about to happen. If a company tries to delist its shares during a period when the market is down, it may be a strategy to buy back shares in low price.

At times, a company may hold delisting plan, if the promoters do not agree with the discovered price that has been arrived through the reverse book-building process. If an investor has bought a share at higher valuation compared to its peers, then he may end up with a big loss.

On the contrary, investor should worry about involuntarily delisting of a company. In such cases, minority shareholders may end up getting a poor deal, as there is no other option but to sell their shares at the price decides by the Stock Exchange.

Reference – Example of Voluntary and Involuntary delisted companies taken from the site https://www.bseindia.com/corporates/Delist_Comp.aspx